A brand-new pose-based human instance segmentation which separates instances based on human pose, rather than proposal region detection. 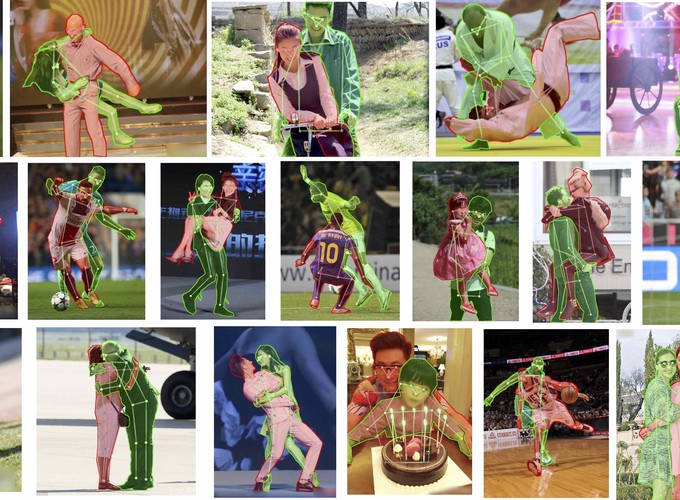 A brand-new pose-based human instance segmentation which separates instances based on human pose, rather than proposal region detection.

In this post, we will review the paper “Pose2Seg: Detection Free Human Instance Segmentation” from CVPR 2019. The paper presents a new approach to human instance segmentation which separates instances based on human pose, rather than proposal region detection.

Some highlights of this paper:

Human pose estimation and segmentation are important information to have better understanding about human activity. There are lots of research focused on this topic. One of the most popular deep learning methods is Mask R-CNN which is a simple and general framework for object instance segmentation.

Even through methods like Mask-RCNN can detect objects and generate segmentation mask for each instance in the image. There are some problems with these approaches:

The proposed method in this paper, Pose2Seg, is designed specifically for human instance segmentation with the following advantages:

Occluded Human Benchmark (OCHuman) dataset is introduced in this paper to emphasize occlusion as a challenging problem for researches to study and encourage the algorithms to become more practical for real life situations.

Occluded Human Benchmark (OCHuman) dataset contains 8110 detailed annotated human instances with 4731 images. On average, over 67% of the bounding-box area of a human is occluded by one or several other persons.

Here are some images from the OCHuman dataset:

Here is a table which compares COCO Dataset and OCHuman Dataset.

As you can see, COCO contains few occluded human cases and it can not help to evaluate the capability of methods when faces with occlusions.

OCHuman is designed for all three most important tasks related to humans: detection, pose estimation and instance segmentation.

The most important aspect of OCHuman is the average MaxIoU which is 0.67. That means over 67% of the bounding-box area of a human is occluded by one or several other persons. This is a very common problem in real life applications such as video surveillance or in-store human behaviour analysis.

The structure of Pose2Seg is shown in the following image:

The steps of this method can be described as follows:

The official PyTorch code for the paper can be found at https://github.com/liruilong940607/Pose2Seg